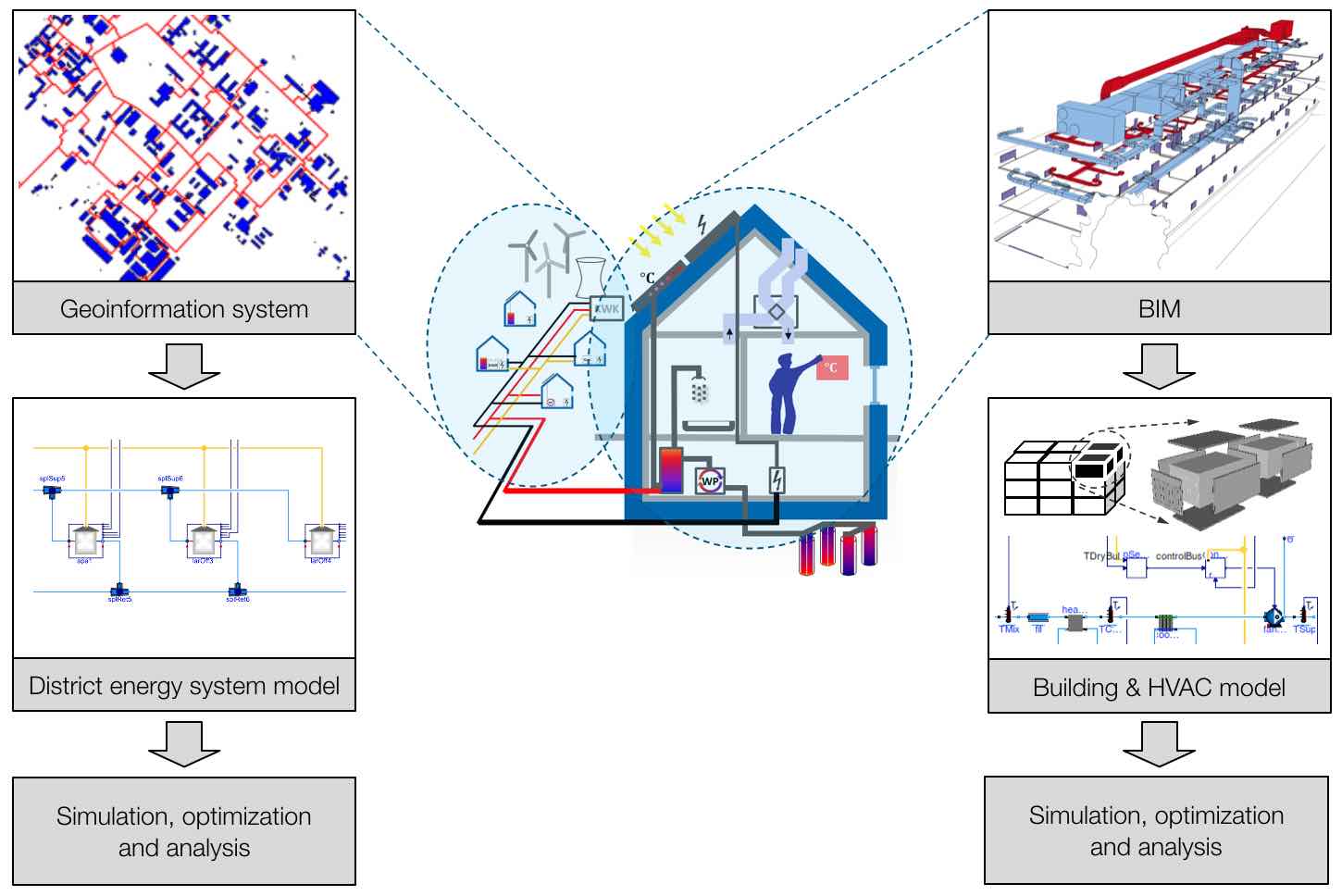 IBPSA Project 1 will create open-source software that builds the basis of next generation computing tools for the design and operation of building and district energy and control systems. It extends work conducted under the IEA EBC Annex 60. All work is open-source and built on three standards:

The main tasks, which evolved from the original workplan, are as described below.

This work package will develop a free open-source library of Modelica models for design and operation of building and community energy and control systems with associated documentation for new and experienced users. The library is being developed through the further development of the Modelica IBPSA Library (github.com/ibpsa/modelica-ibpsa), a library which is used as the core of the four Modelica libraries

All models are documented and validated against analytical solutions, against the results of other simulators or against measurement data.

The BOPTEST framework consist of reference building emulation test cases, key performance indicators (KPIs) for quantification and assessment, and a software platform to select and manage test cases, exchange control and measurement data, calculate KPIs and generate reports. The aim of a test case is to provide a clear and unambiguously defined scenario where any controller can be tested to enable a fair comparison between different control strategies. Therefore, a test case is defined as a combination of a building emulator model and a data-set gathering boundary conditions like weather, energy prices, emission factors, occupancy schedules and comfort requirements for a one-year duration. The selected test cases represent combinations of buildings and energy systems typically encountered in Europe and the US. Each test case describes the signals that are accessible at different control levels, e.g. room temperature set points at high level, and damper and valve positions and fan and pump speeds at low level. Baseline controllers are included and operate whenever the control signal is not overwritten by the external (tested) controller.

Also, a library with models that are suited for use in nonlinear Model Predictive Control (MPC) is being developed.

This work package addresses urban scale energy performance simulation of domestic and non-domestic buildings. Highlighting the exchange requirements and country-specific data mapping approaches, the work package also deals with archetypal definitions of buildings with respect to the generalization of country-specific age-bands, geometrical forms and building functions. Semantic data enrichment, parsimonious geometric information processing and the participation in development of the CityGML schema and EnergyADE for specific simulation tools is also emphasized. Considering different modelling techniques, generic import-export functionalities and enrichment algorithms, the team aims to demonstrate the application of the developed workflows for a range of tools, including Modelica and EnergyPlus, and for a range of geographical contexts and application use cases. The GML ToolBox, which extends the pre-processing of geometric prerequisites, modelling of thermal zones and openings and checks CityGML base standards and ADE conformance conditions for dynamic heating and cooling demand simulations in EnergyPlus, is one such example. Another example is an extension to the TEASER tool that is currently being developed to process the five CityGML Levels of Detail and Energy ADE information as an input for annual thermal simulation using Modelica. A further example is the development of a new workflow for the preparation of large (thousands to tens of thousands of buildings) urban scenes for simulation using the CitySim+ urban enery simulation engine. Open source translators and workflows for district energy simulations can be recognized as some of the outputs for this work package.

This work package starts from the core observations that CAD-integrated calculation and dimensioning requires detailed models and that such models are typically not available in the early design stages. Furthermore, common HVAC classification schemes are lacking. HVAC wiring diagrams, which are relevant for linking with control descriptions, cannot be exchanged with common software. Standards are not available for digital function specification exchange. Existing BIM software is typically not capable of extracting space boundary descriptions in a way to be used for energy performance simulation using zonal modeling or CFD-based detailed indoor air flow analysis.

The work package therefore addresses such data classification and specification, geometry and HVAC model processing. In the first phase, groundwork was set up for the collaborative development and testing of different classes of geometric algorithms for transforming building information models to building performance simulation. Various libraries were considered for reading IFC data and for processing geometric information such as IfcOpenShell, IfcPlusPlus, xBIM (IFC) as well as geometry kernels such as OpenCascade, ParaSolid and ACIS.

Based on this experience, developments will be continued using the IfcOpenShell and OpenCascade libraries. Advanced space boundary algorithms for model topology analysis and model generation are currently tested and new algorithms are developed.

Link to the WP 2.2 development repository

This work package is developing a framework called DESTEST to test District Energy System simulations. The aim of DESTEST is to provide a means to validate models of urban energy systems by defining specific district energy cases for testing in different simulation environments. By carefully selecting and specifying these cases, and by using different libraries for modeling these energy systems, a thorough verification, comparison and benchmarking will become possible. The description of the DESTEST cases and the simulation results of extensively verified models for urban energy systems will be made available as a reference for comparing other simulation programs and model libraries.

This work package makes use of common exercises in which different participants solve a well described case, discuss the difficulties during execution and compare the results. This common exercises will gradually increase in complexity: different building typologies and characteristics, climate and occupancy patterns as well as districts with different scales will be implemented. With respect to networks, cooling networks and electrical grids will also be analysed. Finally, demand and distribution subsystems will be combined to assess their performance and to check interoperability of tools that model separate subsystems.

This work package will demonstrate capabilities enabled by the use of Modelica for building and district energy systems. A number of case studies from different applications (e.g. HVAC systems in buildings, district heating networks etc.) will be collected and described through a unified template. The template includes information such as objective of the simulation study, system diagram, computing time, libraries and models used. The collection and systematic description of application case studies aim at

The software develop in this project will be available under the following open-source license.